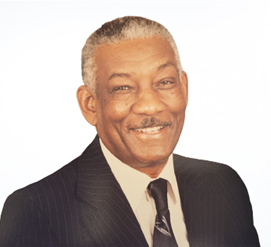 Bell Vinson was the eleventh child of twelve and the youngest son born to William and Adeline Vinson on May 30, 1920, in Macon County, Georgia. The following is a chronological order of all the children born to this couple during their marriage: Willie Lee, Annie Bell, John, Richard, Lillie Bell, Daisy Mae, Estella, Emma Mae, Pauline, Bob Henry, Bell and Susie. As a young child, he loved playing with his older brothers and sisters, but more than this he loved being next to the baby in the family because so much attention was given to him. Once “Bell” reached a suitable age and size, his mother took him along with her to work in the peach field. She taught him the size and color of the peach that he would be paid to pick. This was Bell’s first paid job. It was laborious, but at this young age he didn’t care, he was happy to earn $0.50 per day in the late 1920’s because he had his own money.

When Uncle Bell became old enough, his parents enrolled him at the Flint River Trade School in Montezuma, Georgia where he studied carpentry through the sixth grade. He remembered having a pleasant, yet strict and disciplined childhood. In retrospect, the intact family structure obviously, positively influenced his basic character development. Judging by his accomplishments, we can conclude that his 102 years culminated as a beautiful, fruitful and industrious life well lived.

During WWII Uncle Sam called for his service in 1940 by means of the draft. Uncle Bell left home for the first time to serve our country by being inducted into the United States Army for four years with tours in England and France. Uncle Bell used these experiences to improve his skills in carpentry. Following his honorable discharge, he returned home. When he returned home, he noticed that very little had changed and it conflicted with his expanded view of the world and his broaden concept of life. Therefore, Uncle Bell decided to leave Macon County, but before leaving he purchased a tractor for the family farm which at that time was operated by his father. He used the money his mother had saved that he sent home during the years he was in the army to purchase a “Farm All Tractor” the top of the line brand at that time.

Uncle Bell moved to Akron, Ohio and landed a good job with B.F. Goodrich Rubber Company where he eventually retired in 1979. When he arrived in Akron, he immediately enrolled in school and completed grades seven through ten.

During his tenure in Akron, he attended the First- Born Church of Akron where he met Joe Ella Mendoza in late 1945 and married her in September 1946. Uncle Bell and Joe Ella were married for over 50 years.

Elder Bell Vinson was called into the ministry in 1955 and began his pastorate in Canton, Ohio. Following his retirement in Akron, he and Joe Ella moved to Fort Valley, Georgia and built a beautiful home here.

To order memorial trees or send flowers to the family in memory of Bell Vinson, please visit our flower store.

The body will be inside the church for viewing at 11 A.M.. The service will begin at noon.