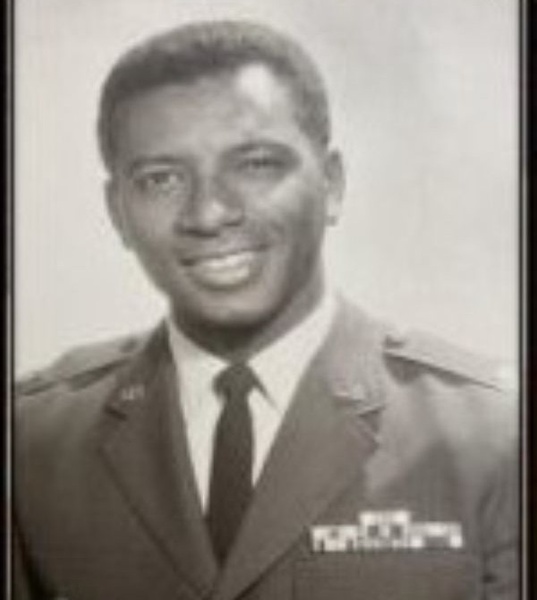 George Lemuel Smith was born on January 24, 1941, in Brazil, Indiana. Because he was the stepson of a member of the military, George attended many schools across the world. George attended Phenix High School in Hampton, Virginia, where, due to his excellent speaking voice, he became the sports announcer for the live games. He graduated from Phenix High School in 1959 and attended Bradley University as an Air Force ROTC Cadet.
Upon graduation from Bradley University in 1963, he began his distinguished career in the Air Force as a First Lieutenant stationed at Lackland Air Force Base in San Antonio, Texas. As a Civil Engineer, he designed many Air Force buildings and runways located on bases both around the country and internationally.
George had a long and highly awarded career in the Air Force represented by many ribbons and medals including the Meritorious Service Medal, Air Force Commendation Medal, Small Arms Expert Marksmanship Ribbon, Air Force Longevity Service Ribbon and the Air Force Outstanding Unit Award to name a few.
George traveled the world in the Air Force and was stationed in Japan, Korea, Taiwan and Thailand. Domestically, he was stationed at the Pentagon in Washington, D.C., Patrick Air Force Base in Florida, and Robins Air Force Base in Georgia. He continued his career completing multiple training courses and ascended to supervisory positions. In his ongoing quest for knowledge, George pursued and received a master’s degree from Georgia State University. As one cousin put it, “George was handsome, clean-cut, and was the consummate military officer in every sense.” In 1983, George retired from the Air Force as a Lieutenant Colonel at Robins Air Force Base. His guiding influence coupled with his experience and memories, inspired his two sons, Brian and Kyle, along with his grandson, Zion, to follow his footsteps in joining the Air Force. Brian finished his career with the Air Force as a Technical Sergeant and Kyle as a Captain. Zion will begin his career as an Airman within the next few months. One can say that this is truly an Air Force family.
George found home in Central and Southwest Georgia where the kindness of the people provided a warm and welcoming environment for the guy from Indiana. He began to grow roots in Central Georgia where he was an active member of the community and was involved in his church as a minister. He also mentored young people and was willing to do what he could to help his church community. In his second career, George handled Community Planning for Fort Valley State University and went on to become the Physical Plant Director at Georgia Southwestern State University where he oversaw the growth and development of campus buildings and architectural projects.
George was preceded in death by his mother, Myrtle Branch Smith, stepfather, A.C. Smith, and father, George Lemuel “Buddy” Smith, Senior. George is survived by his wife, Beverly and four children, Tamera Brown Alvarado (Sean), Brian Smith (Maya), Kyle Smith (Korene) and Christina Smith; ten grandchildren, Morgan, Ryan, Nigel, Zion, Uriel, Fabian, McKenzie, Paris, Cohen and Kristian; and sister, Julia Dunbar.

He will be deeply missed by his loving family, church members and dear friends.

To order memorial trees or send flowers to the family in memory of George Lemuel Smith, please visit our flower store.